There can be only one … gold chocolate bunny 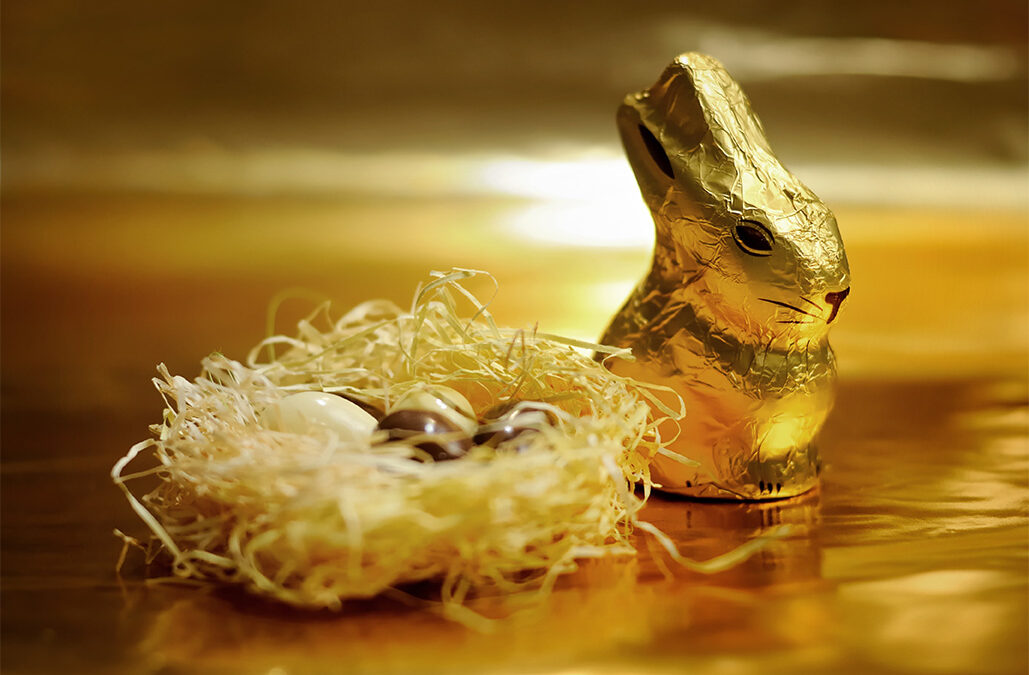 With more than 500 million sold over the past three decades and a market share of over 40 percent (2017), the chocolate bunny in gold foil, red bow and bell is the clear market leader. But there can be no talk of post-Easter peace.

Bad karma for gold bunnies in the past

We remember: between 2002 and 2013, Lindt already struggled to ban the Easter bunnies of the Franconian confectioner Riegelein from the market. The dispute went to the Federal Court of Justice (BGH) twice, with the chocolate bunnies, which were submitted to the court as corpus delicti, mysteriously disappearing on their way through the instances. Who knows: perhaps they were caught up with their destined end on the way to the evidence room. In any case, the Riegelein bunny was allowed to continue competing with Lindt. Almost at the same time, in 2012, the European Court of Justice (ECJ) then finally ruled that Lindt could not have the „golden bunny“ with collar protected as a three-dimensional Community trademark (C-98/11, 24.05.2012).

Next level of escalation

And now the next attempt:  This time Lindt tries prohibiting Confiserie Heilemann from Swabia from also packaging its chocolate bunnies in gold foil. As a matter of fact, numerous color trademarks have been registered in the recent years. On the other hand, the large number of decisions by the highest courts on this subject, with titles such as „Nivea Blau“ („Nivea Blue“), „Langenscheid-Gelb“ („Langenscheid Yellow“) or „Sparkassen-Rot“ („Savings Bank Red“), shows that the subject matter is by no means trivial.

This is all the more true if the trademark for which legal protection against infringement is claimed is a sign that has not been registered. The use of a sign in the course of trade may also be sufficient for protection under trademark law if the sign has acquired a reputation as a trademark within the relevant public (Sec. 4 No. 2 MarkenG). This is referred to as a „use mark“. It is obvious that in such a case, the requirements for asserting such protection are once again significantly higher.

It was therefore hardly surprising that Lindt came off as the second winner before the Munich Higher Regional Court. Although the company had proved with the help of a market study that around 80% of the related public associated the shade of gold with a company, this was not enough for the judges. They took the view that protection for an unregistered abstract color mark had previously only been assumed if a company used the color in question as a „house color for various products in the range of goods and services for which color mark protection is claimed, and not just for a specific product.“ Since Lindt also sells chocolate bunnies in a different guise, the public could not relate this color to the company (OLG Munich 29 U 6389/19. July 30, 2020).

Now the BGH must once again deal with the matter. And there it looks like a belated Easter egg for Lindt. The presiding judge Thomas Koch already stated in advance that the market study was carried out methodically correct and that a market penetration of 80% is „actually enough“ for a use mark. Presumably, the BGH will publish its ruling (BGH I ZR 139/20) at the end of May. However, it is probably premature to believe that this will be the end of the matter. Since the Munich Higher Regional Court has not yet taken a position on the question of likelihood of confusion, it is more likely that the case will be referred back and go into the next round.