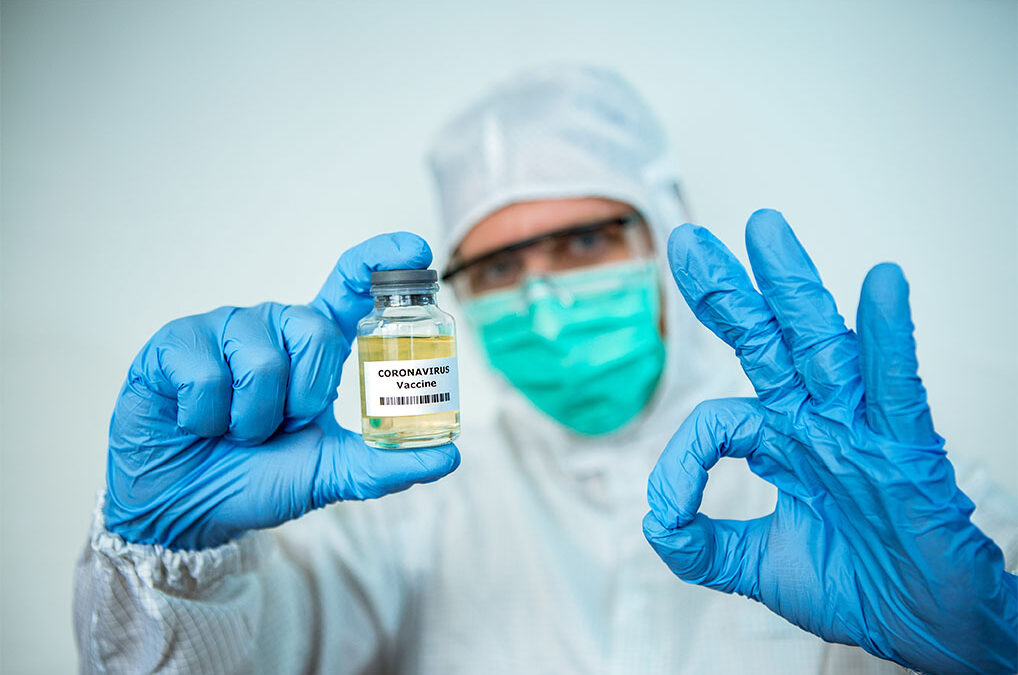 As the second Corona wave is accelerating in Europe and the US, thereby forcing us again to restrict our social interaction to a bare minimum, the announcements in recent days by Pfizer/BioNTech and Moderna of highly effective vaccines protecting against the SARS-Cov2 virus has sparked hope that we are at a turning point of this pandemic. Both vaccines are the result of cutting-edge research and illustrate the immense progress of the life science industry in recent years. However, while the initially results presented are promising, many questions remain to be answered before governmental approval and distribution can start.

Long-lasting immunity towards viruses and other pathogens is orchestrated by the adaptive immune system. When we encounter an infection, the immune system identifies the threat and launches a highly targeted response that leads to the generation of an immunological memory protecting us from repeated infections with the same pathogen. Research over the last century has greatly improved our understanding of the relevant molecular processes. Cells produce proteins that make the complex processes within our cells possible. The information encoding the specific sequence of different amino acids that ultimately fold into proteins is found in our DNA. Genes are transcribed into messenger RNAs (mRNAs), which are delivered to ribosomes that assemble proteins based on the information carried by the mRNA molecule. Viruses hijack this endogenous machinery for replication and spreading throughout the body by providing the information necessary to assemble new virus copies within infected cells. However, the adaptive immune system identifies infections by scanning protein fragments presented on the cell’s surface, which mirrors the content of all proteins present within the cell. Once a foreign protein is detected, the adaptive immune system is activated, and a targeted response is launched leading to the generation of multiple highly specialised cell types able to kill off infected cells or produce neutralising antibodies.

Vaccines train the adaptive immune system to identify previously unknown pathogens and induce highly targeted and long-lasting memories. This can be achieved by either infecting humans with a weakened or inactivated strain that induces an immune response while reducing pathogenic responses to a minimum, or by presenting virus-derived particles to the adaptive immune system thereby simulating an actual infection.

Live attenuated vaccines are available since the 1950s and induce excellent immunological responses leading to long-lasting immunity against targeted pathogens. However, since individuals are infected with an active virus, this strategy has several risks. Weakened strains have the potential to revert back to a more pathogenic form and cause diseases. This is a particular concern for patients with weakened immune systems and life vaccines are generally not given during pregnancy due to safety concerns. Additionally, designing virus strains that are unable to cause pathogenic responses but induce sufficient protection takes a lot of time and elaborate safety testing procedures. A more recent vaccination strategy is the injection of virus-derived particles that are recognised by the immune system but are insufficient to induce an infection.

The immunogenic trigger is, however, less likely to induce long-lasting immunity and often requires booster shots. Additionally, the production of virus-derived particles is complicated, and development of the ideal formulation usually takes several years.

The recent development of mRNA-based vaccines has the potential to overcome some of the limitations of “classical” immunisation strategies. Many viruses, such as SARS-CoV2 consist of a lipid-protein layer that allows the uptake of the genetic information in form of RNA by host cells. mRNA vaccines strongly resemble these viruses. Instead of the entire virus genome, however, the mRNA encodes only a specific protein fragment found on the virus’ surface that has been shown to induce strong immunological responses in patients infected with similar corona viruses.

mRNAs can be easily generated in large quantities in vitro. RNA is then packaged into lipid-based nanoparticles that, similar to viruses, can enter cells. Following uptake, the mRNA is translated giving rise to virus protein. Fragments of these endogenously translated proteins are then presented on the cell surface. The immune system recognises these foreign fragments and initiates an immune response leading to the generation of virus-specific immune cells and the generation of neutralising antibodies (Figure 1).

mRNAs are transcribed in vitro incorporating modified nucleotides that increase translational efficiency and improve stability. Modified mRNAs are then packaged in lipid-based nanoparticles and are injected into patients. Following cellular uptake of nanoparticles, cells produce SARS-Cov2 spike protein. Fragments of spike protein are presented on the cell surface and recognised by the adaptive immune system as “foreign” leading to an immune response. (modified from Verbeke et al., 2019)

The recently announced vaccines against SARS-Cov2 by Pfizer/BioNTech and Moderna utilise this mRNA-based vaccination platform and consist of mRNAs encoding the spike protein used by the virus to enter host cells. Additionally, the mRNA structure of the BioNTech vaccine BNT162b1 is modified to increase stability and protein translation efficiency, thereby increasing the amount of virus protein produced and ultimately presented on cell surfaces. Initial clinical phase I/II trails demonstrated the induction of an immune response following two intramuscular injections with the mRNA vaccine (Figure 2). The presence of virus-targeting antibodies is a strong indication for an effective protection against virus infection. However, whether the immune response is sufficient to prevent the development of COVID symptoms in patients had not been demonstrated until now. Pfizer/BioNTech, as well as Moderna, announced preliminary results of their phase III clinical trials recently, strongly suggesting a protection from 90% and 94.5% of COVID infections in vaccinated subject groups compared to placebo controls respectively. This a major step forward to bring this pandemic to an end by building up immunity within the population without risking deleterious COVID symptoms. However, while the initial results seem promising, the full studies have not finished yet nor have results been published in peer-reviewed journals. Additionally, how long both vaccines protect from infection can only be addressed in the following months and years. Further information is therefore necessary to allow the approval of these promising candidates in the very near future by the EMA or FDA. 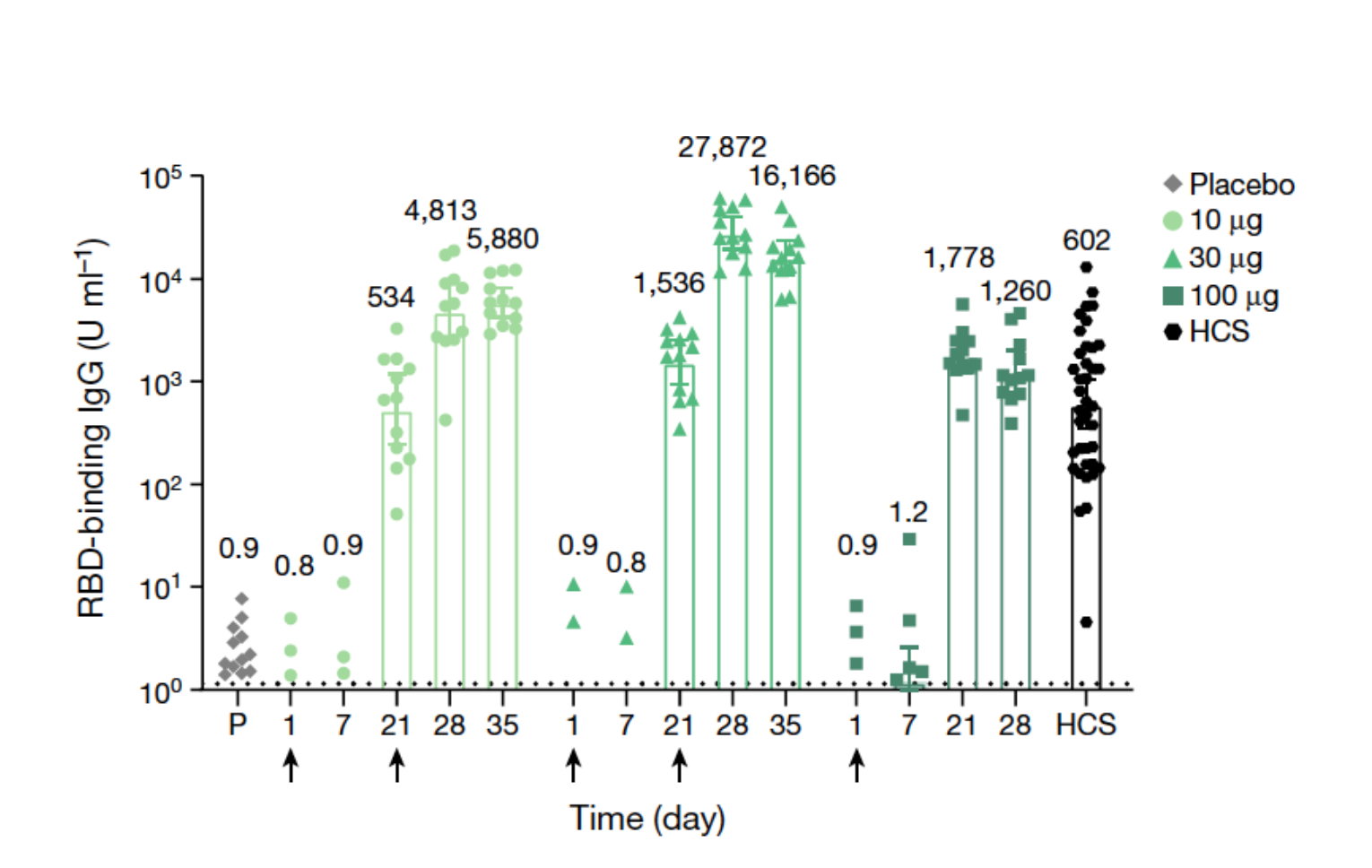 Bar graph shows IgG antibody concentration in participant serum specifically binding the receptor-binding domain (RBD) of the spike protein of SARS-Cov2. Participants in groups of 15 were vaccinated with the indicated dose levels of BNT162b1 (n = 12) or with placebo (n = 3) on days 1 (all dose levels and placebo) and 21 (10-μg and 30-μg dose levels and placebo). Responses in individuals who received the placebo for each of the dosing groups are combined. The 28- and 35-day blood samples were obtained 7 and 14 days after the second vaccination. Sera were obtained before vaccination (day 1), and 7, 21, 28 and 35 days after the first vaccination. Human COVID-19 convalescent sera (HCS, n = 38) were obtained at least 14 days after PCR-confirmed diagnosis and at a time when the donors were asymptomatic (Modified from Mulligan et al., 2020).

Assuming the vaccines are as effective as initial results suggest and approval is fast-tracked, the logistics of rapidly administrating the vaccines to potentially billions of people is a logistic challenge unlike anything ever encountered. The distribution of mRNA-based vaccines is complicated due to the high temperature sensitivity of mRNA. Both vaccines have to be kept below freezing point with the BioNTech vaccine requiring -80°C and the Moderna vaccine requiring -20°C for long-term storage. This will be not only challenging for shipping vaccines to industrial countries with established cold chains but especially for developing nations lacking access to appropriate facilities. Licencing patent agreements between the pharmaceutical industry and struggling nations could allow for more local production thereby reducing the need for elaborate storage strategies.

The development of both vaccines is a huge accomplishment for science and, providing both candidates prove safe and effective once all studies have been concluded, might soon start to turn the tide in this Corona crisis. However, while production has to be ramped up and distribution as well as legal challenges have to be addressed, we will still have to wait for a significant amount of time before we will see wide-spread vaccination programs accessible globally.