NO FLOWERS FOR THE “FLOWER THROWER” 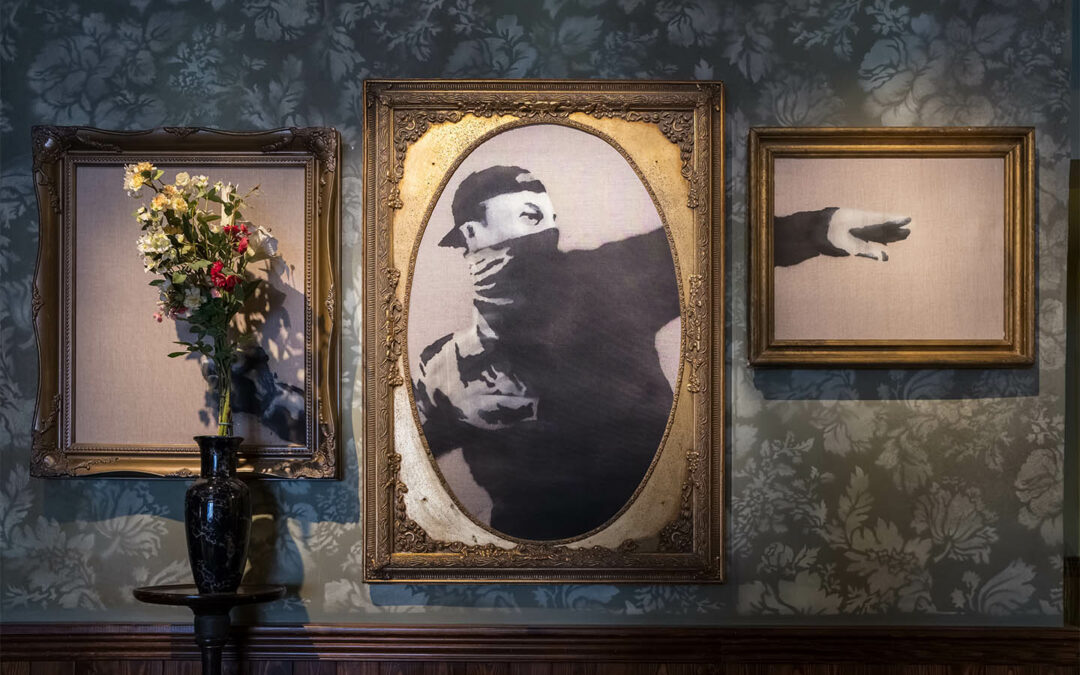 Anonymous Street-Art artist lost TM protection for one of his most iconic motifs for allegedly having filed the mark in bad faith.

Banksy is certainly one of the hottest artists of our time. His Street-Art artworks suddenly appear in the most unusual places. The boards and canvases he works on are among the most sought-after trophies on the art market and bring in seven-digit sums at auctions – even if the paintings show a certain tendency to destroy themselves. Part of the hype is certainly that Banksy keeps his identity secret. All that is known is that he is said to come from the Bristol area and lives around London..

In addition to his works, the artist also repeatedly draws attention to himself with social criticism. In his book „Wall and Piece“, published in 2005, he made a very emphatic plea to abolish copyright, which in any case is only for losers. In fact, Banksy has always liked to make use of other artists‘ motifs.

As early as 2014, he had the well-known motif of the „flower thrower“ registered as a community trademark (EU 012575155), claiming a large number of goods and services. A second trademark registration (018118853) was made in 2019. In both cases the Pest Control Office Ltd. which is the agency responsible for authenticating his works served as the applicant.

Now EUIPO has granted the request for cancellation of the earlier trademark in the first instance.

The decision was preceded by an increasing number of imitations. The flower thrower is one of the most iconic motifs that Banksy first sprayed on a wall in Jerusalem in 2005. Now, however, the image of the masked man throwing a bouquet of flowers has found its way onto T-shirts, coffee cups and greeting cards. A clear violation of trademark rights, so that the British company Full Color Black felt compelled to file a cancellation suit. The plaintiffs argued, among other things, that the artist had repeatedly made it clear through his own publications in the past that he had no interest whatsoever in using his trademark rights. This is a quite remarkable argument, because a lack of intention to use a trademark can indeed be a reason for cancellation.

Banksy probably saw that too

In 2019, in order to overcome the argument for cancellation, he set up his own store with the title „Gross Domestic Product“ in the southern London district of Croydon. „I was advised to offer a range of my own merchandise items, as this was the best way to protect my works and my name,“ Banksy told the BBC. He also told the station that he had not fundamentally changed his position on copyright, although in this particular case he was trying to protect his artistic rights.

EUIPO considered it proven that the trademark had not been filed with the aim of giving the public an indication of the origin of the goods and services. The task was rather to generate alternative protection, since Banksy could only enforce copyright protection to a limited extent due to its anonymity.

With reference to the recently issued decision „Skykick“ of the ECJ (C-371/18 29/01/2020), the cancellation was decided because the trademark had been applied for without intention of use and therefore in bad faith, i.e. only to hinder competition. The opening of an own store in London was obviously only in response to the cancellation request.

The Skykick decision is also of general interest to artists who wish to protect the representations of their works as trademarks. Unless there is an intention to use these trademarks in connection with the goods and services claimed in a trademark registration, there is a clear possibility that they are not enforceable and are subject to cancellation. Banksy may appeal the EUIPO decision to the European Court of Justice. However, if the cancellation becomes legally binding, he must expect to lose the trademark rights to further representations of his works.